I’ve been seeing a lot of consternation over the invasion of the robots in the US working world. It seems the biggest fear is that these robots will lay waste to the remainder of the American manufacturing workforce. It’s a scary prospect, to be sure.

To see how bad it would be, I thought I’d have a look at how the robot apocalypse played out in other countries. I looked specifically at Japan and Germany. Both countries went all in at the very beginning of industrial robotics – much more than the United States did. My thinking is that if automation is as apocalyptic as feared, there would be easily found effects in these countries. The best place to see this would be in a nation’s unemployment numbers. Luckily, the St. Louis Federal Reserve Bank keeps track of such things.

The above chart is a comparison of unemployment numbers for each of the countries selected for the time period between 1970 and 1989. The period was chosen for beginning arguably before the robots. 1970 is regarded as the inception point for commercially available industrial robotics and 1988 is chosen because that’s just before Germany had to deal with reunification – an issue that’ll skew numbers for obvious reasons.

The graph easily points out that there was a surge in unemployment in 1975 and the early 1980s for two countries. Unfortunately, one was the U.S. and the other was Germany. This makes it difficult to prove robots did it, as the U.S., other than the auto industry, really didn’t see a lot of robotics adoption. In fact, the fluctuation of the American numbers could easily be explained by the S&L crisis and perhaps the returning vets’ pressure on the system after the Vietnam war. 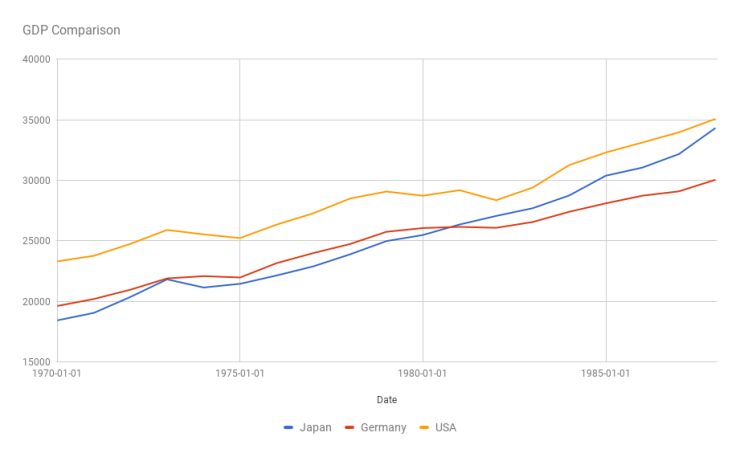 Looking at the GDP for all three countries is also pretty inconclusive at this altitude. All three countries roughly follow the same trajectory. This is intriguing in that it would point out that the robots weren’t responsible for tremendous growth, either. Perhaps it could be posited that the machines were merely necessary to maintain their competitiveness in the market.

If it can’t be conclusively be stated (obviously this is not an exhaustive investigation, it is a blog post, after all) that robots are the workforce’s enemy and it also cannot be reasoned easily that they represent a tremendous economic advantage, what should we consider them?

I would rationalize them as the cost of doing business in the coming years, that is if the U.S. still wants to be in some sort of manufacturing business. 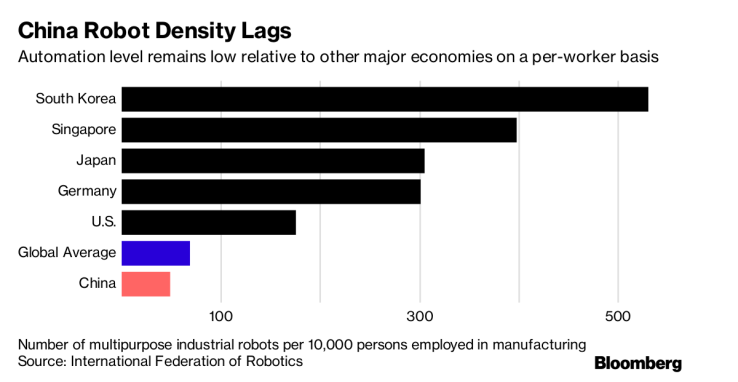 Borrowing this graph from Bloomberg (where I get the bulk of my news from, and you should too), my point about the cost of doing business becomes a bit more evident – or at least worth the consideration.
While the graph is built for a story on the massive growth in robotics adoption in China, an equally important takeaway is that we can see how much the U.S. has to go to catch up with the other manufacturing powerhouses. This lag puts the U.S. at a little more than half the number of machines per person than the two comparative countries in this post. Could this lag end up costing us what’s left of our competitive ability (or merely cost of doing business) in that manufacturing capability we currently have? Perhaps this is the real subject we should be fearing will end up costing our jobs – not enough robots.