Lately, I’ve been rather intrigued by food packaging, perhaps because I have been focused NOT in food packaging for so long. Whatever the case, I have noticed that, for the most part, food packaging design has seemed to have been boiled down to a basic formula. The formula has what is essentially a frame or maybe some banding that contains the trade dress and logo. Below the top band of branding-work is the name of the product. The remainder of the packaging is the standard perfect product preparation shot and finally around that there’s a sprinkling of violators that yell out some sort of benefit.

All in all, it’s a very effective way to make packaging. You hit all the high-points and supposedly answer all of the customer’s questions. The down-side is that everyone is doing this very same thing. In that context, does this plan work all the time?

Here is an excellent example of one brand doing something different in the fry mix segment of your groccer’s shelves. Crispy Frymix by Drake’s

This packaging nearly completely walks away from the standardized format of modern branded packaging. There’s no product shot at all on the front. They opted instead for a very simple colorful line-work image. The obvious downside is that you can’t really say what Drake’s fry mix looks like compared to the others.

This brings me to a theorem that I have been considering for quite some time: I believe that shoppers understand what they are looking for and are reasonably capable of finding the general area where to find items in stores. For instance, understanding that in the bread aisle is where they’re going see bread. Now, that seems pretty simple, right? Almost dumb-simple, but consider how many companies demand that on the most valuable packaging real estate the basic description of the product needs to be seen – and big (BREAD!).

Think about this: if you’re standing in the bread aisle, surrounded by bread that all kind of looks the same, do you really need to announce that it’s bread on the front of the package? The other supporting point is that for the most part, people know generally what products should look like and if they don’t they usually ask for help. Everyone knows what bread is and what it normally looks like, because it’s looked the same for longer than there’s been most countries. It would be different if the bread they were making was purple and had hair  like a porcupine…

Bringing this all back from the lack of bread design diversity in modern shopping centers, the crux of my argument is that on most common, maybe even commodity products, the prepared product image is redundant when you take into account the consumer. We all know what a breaded coating is supposed to look like.

The real goal of packaging from a sales point of view is to get that product in the hands of a buying consumer. I think the best way to do that is to create some sort of emotional connection with the consumer. Obviously, there are many ways to do it and it can be argued that these standardized product shots do just that, but when they are faced with a shelf full of similar offerings as above, it is the Drake’s package that stands out in a sea of all-too similar boxes. People will be drawn to the package that is not like the others, and they will certainly have a far easier time remembering the duck product (especially if it works well) on their following visits than any from a row of formula-designed packages on the shelf.

I’m always looking out for novel ways of merchandising. Going to my local, but not chain, coffee shop I spied something pretty nifty. Normally, a generic cup of coffee looks, well, generic. Here is an example that we all know. 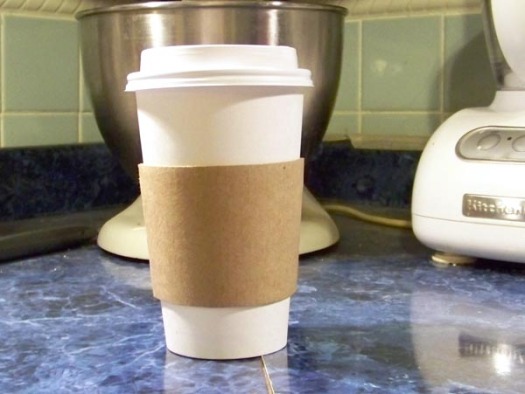 What did I find at my coffee shop last night? This clever bit of advertising on a previously generic accessory. 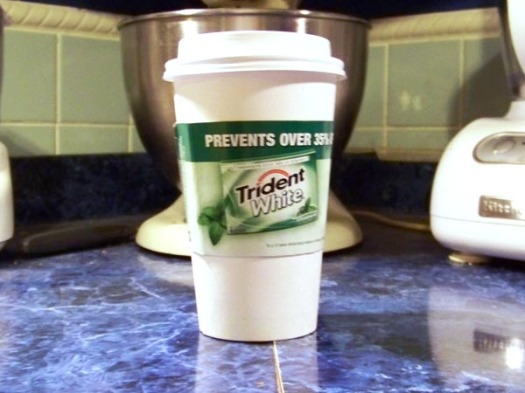 To me, this is a wonderful bit of advertising that works for both the advertiser and the coffee shop, if things are done well. Obviously, it is great for the fresh breath people, they put their ads right where people get a case of bad breath, and to be honest, I think a lot of people need that ad-reminder! I hope that this works out well for the coffee shops, where they get these insulators at least free if not get a little stipend from using them.

My one thought about these pieces is that they have a bit of a flaw, and that happens when someone goes to handle the drink. Another concern is that the coupon is kind of unuseable as a coupon. I am sure the bar code is scannable, but I am not sure who would clip this and take it to a store for redemption, but then again, I don’t know any coupon-cutters….

When the customer grabs the drink the ad becomes obscured by the act of holding the beverage. I am sure there’ll be a bit of “gee! what does your drink say!” push when these things first hit the street, but it won’t last long after there’s a lot in the wild. The configuration really only works when a person is not holding the beverage – probably not the best situation for a carry-out item. 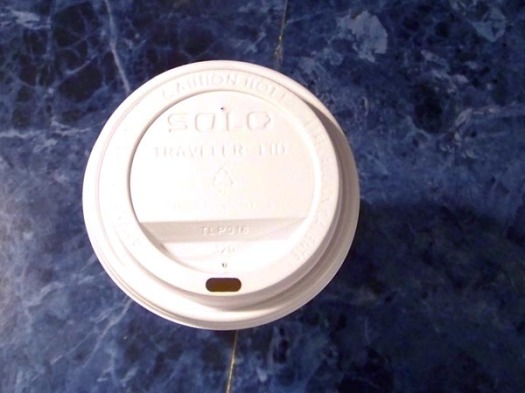 I think the better solution is to place advertising on the lid of the drink. The real estate is far smaller but the ad is visible at nearly any time the container is in view, not to mention every time someone drinks out of the container. I made a quick and dirty version of this below, so you can get an idea of what I am getting at.

Detractors might say, hey what if the user takes the lid off? The answer is that they can take the insulator off as well, but I think the number of concentrated views one would get by placing it at the exact point that everyone looks at when taking a drink, is really real estate that’s nearly priceless. If you could get away with it, the best thing to do would be to completely brand-color the lids and get that whole area sort of effect. I can’t see any reason that Solo® couldn’t tint the plastic to any color of the rainbow for the right price. The biggest issue would be how to get it into coffee shops or wherever. Even a less brand-driven establishment might push back on you owning the tops of their coffee, but a nice stipend for carrying it and some good styling and someone could make it happen.

Now, by releasing this to the interwebs, if anyone takes it, I’d like to see a little kick-back!

Cadillac plans to add a new small sedan to it’s lineup. Right now, there’s not too much detail about the car. It’s a bit disconcerting, though. I am not so sure Cadillac needs a small car in their lineup. The reason I think this is when you think of the sort of brand structure GM has with their lineups, it would seem out of place at best and diluting at worst.

The most dangerous part of this small-car idea is that GM has tried to do this before and failed every time. The thing that does them in every time is that budgets come into play. Cost-cutting happens. The car is based on another, cheaper model and quality goes down. The brand gets a black eye and by the sheer token of releasing a cheaper car, they destroy the equity in the higher-end offerings.

When you think of GM, you see three brands: Cadillac, Buick and Chevy. It would seem to me that if you were going to structure these car brands off you’d do break them out into something like the following: Cadillac would be the luxury / luxury-sport brand at the top end of the offerings, meaning it would compete with lines like Lexus and Mercedes. Then you would have the mid-line Buick. This brand would consist of the business-class of vehicles, facing the the Toyota Avalon,   the Volvo S70 and others of that size where they’re designed more for the mid-management business-person. This leaves you with the Chevy line, picking up the entry-level and various sport models (Ideally, I’d discontinue the Chevy line of pick-ups as you already have the similar GMC line).

If this brand structure were to be followed, then Cadillac would be chipping away at the other brand’s markets by introducing a smaller vehicle. Why does that matter? A few reasons: first, GM would start competition between its own brands, stemming from a duplication of models – we’ve all scratched our heads at this through the 80’s up to the melt-down. The most important reason, though, is that it wrecks the brand’s identity, which is probably the most valuable part of the whole experience.

Cadillac spends most of its days (or should be) being America’s premiere luxury auto manufacturer. This is a very tough prospect, as it has to face some severe competition in the likes of BMW, Lexus, Mercedes, and Infinity. To be a luxury brand, it takes a certain amount of ‘aloofness’. It needs to be its own company or at least division on its own so that Cadillac can establish a high grade of product without a large connection to its non-premium cousins. That means it cannot look like any model shares parts with a Cobalt or something. Lexus does this very well – so well that most people don’t even know that they’re a part of Toyota.

Cadillac really needs to focus on their identity. The buyer they are competing for is far different from the buyer for any other model in the GM line, especially if they want to woo the foreign luxury buyer. Although over the last few years, Cadillac has been doing a superb job of creating a world-class brand (for being part of the Big Three), they really need to keep moving it forward. I don’t have the research in front of me, but I would be inclined to believe that Cadillac hasn’t become an option with the Infinity or BMW buyer yet, though they’re starting to get some looks. The reason is that there is a critical something missing from the brand and I think it’s the opposite of ‘affordable luxury’.

Instead of a small car, Cadillac really needs a halo car that they can really hang their hat on. The XLR was a great start. The new stupid-powerful coupe is another great step, but they should really put together a big car (they sell luxury sedans predominantly, right?). One that has the attention to detail, the styling, and the distinction that their wood-be competitors have. A car that people can aspire to get. Something an up-and-coming executive uses as a yardstick to measure if they have made it, much like the S500 or the 700-series. Cadillac needs to have the car that everyone thinks of when they say “Cadillac”. Perception and projection are very powerful when it comes to sales. Cadillac may think they have that already, but they don’t.

For at least one or two models, Cadillac has to stop thinking about being affordable and large production runs. Sometimes exclusivity comes at a loss – file the money under ‘marketing’  if you’d like…  In fact, a small run would be better, as it adds to the exclusivity – which is the piece of the puzzle that the brand is missing. Once they can grasp that identity of exclusivity, then they’ll begin to start seeing a market – and customers –  for a small luxury car.