No matter how you slice it, Linux never really captured that much of the desktop computing environment and to put a finer tip on it, never really hooked-up with the end user. Every desktop and laptop OS is going to have to battle pretty hard to stay relevant in the coming future dominated by things like tablets and cell phones. As desktops recede, what will happen to end-user Linux and what should it do next?

The goal of the desktop linux community should be to embrace these Android appliances if it wants to thrive, not just live in the future. It’s hard to imagine embracing the very items pushing you aside, but this could be linux’s moment to take the lead as a personal operating system. Linux can do this by speeding the integration between Android and Linux.

What does this mean? It means bringing the same apps that run on Android onto Linux. I don’t mean ones that are compatible. I mean THE SAME ONES. Linux should be able to do this as the underlying code for each is not too far away from each other and both open source.  Perhaps create a Wine-like runtime environment or even better a native patch for the desktop to run them.

The benefit of this capability would be incalculable. Linux would side-step the torment of coding for natively compatible apps, freeing the developers from the numerous strains of Linux, that has always plagued Linux as a development platform. It would also give Linux hundreds of thousands of  immediately available and relevant, name brand pre-written applications – none of which run on Windows.

The next step is to integrate the desktop environment into one that’s pretty comfortable for the average Android user. A feat that wouldn’t be that hard to do and Gnome is well on it’s way in its latest incarnation. The hard part is to create a UI that’s congruent with the functionality of Android. Meaning, The menus have to start looking kind of the same, or at least have the same general information in the same general spots. It’s been a slow slog for the linux community to embrace the sort of ease of functionality that you get natively with other OSs, even though it’s made great strides in the last few years,  it really needs to be done now for Linux’s end-user future. This ease of functionality is the big gift Google gave to Linux to make it successful as Android. It is time for Linux to embrace that gift as well.

I am sure that Apple is working on this right now and eventually over the course of the decade, Windows will figure it out, too. The plus here is that if Linux as a community can capture this compatibility, it could very well thrust Linux to the end-user spotlight like it always pined for. Think about it: there are hundreds of thousands of Android users out there using their mobile devices almost all the time with seemingly incompatible Windows or Apple machines at home. What if they could have that exact same functionality at home as they do on their phones?

The other win for Linux, if it can pull off this integration is that the Android market segment (and the loan it made from Linux) can push into Linux. Users of Android items, already  understanding and feeling comfortable using ‘droid items will find it easy to translate this operability to Linux – if the integration is done well. This is really the same scheme that has worked amazingly well for Apple and the iOS to OSX machine up-sell.

I would really like to do this myself, but the time it would take me to learn, other more talented folks could have it running like a top, so I urge the talented developers out there to take up the cause! The Linux community has to strike now (or really last year) with this concept, if it is to secure it’s future and it’s growth for the next 3-5 years, otherwise it will fall away, like so many other good ideas, and we’ll all be stuck between two giant non-listening companies.

So I was going to write something ‘profound’ for this post. Some sort of rumination on something mildly design-like, but I got caught up in updating my netbook’s OS. I just finished up and things are pretty good. I went from running Xubuntu 9.04 to Peppermint OS, which is a very nice netbook implementation of Mint, which is a very nice implementation of Ubuntu Linux and I believe it’s based on 10.04 LTS….nice.  I’d give you a review, but I only have an hour or so on it and reviews just after install aren’t really worth much anyhow. Perhaps in a week or so.

Anyways, my post here is going to be about how to migrate your Mozilla Thunderbird Email Client profile from one Thunderbird to another Thunderbird version. Reading up on this, it seems like the process is pretty easy, finding out HOW to do it is the hardest part. NO MORE!! I will show you how to do it on a Debian-based Linux machine (but I am reasonably sure it will work on other Linux flavors). I run Linux 90% of the time at home so other OS’s I can’t help you with, sorry.

1. Open up a window showing your /home directory.

2. Inside that directory is the folder named after your computer. Mine is called ‘maxwell’ – this is also the name that you log in on when you start things up. Open that directory. 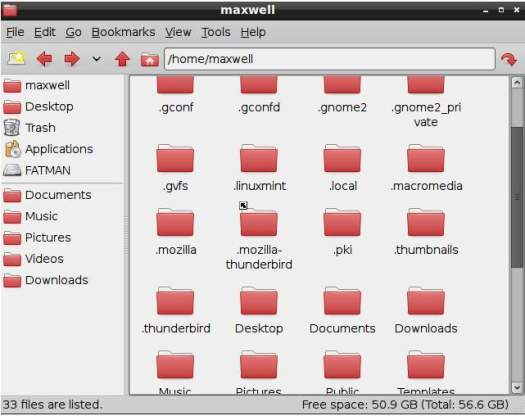 3. Next, you need to show all of the hidden files by going to View/Show Hidden. Now, you’ll see a lot of folders with names starting with a period. we are looking for *either* “.mozilla-thunderbird” or “.thunderbird” These files contain all of your mail goodness and are the things you need to save when you move or back stuff up, so save them somewhere safe.

4. Fire up the new Thunderbird client. Once it gets settled, you can shut it off. Don’t worry about filling anything out, just cancel out and close the program. The main reason to do this is when the new Thunderbird email client starts for the first time, it makes a new ‘.thunderbird’ folder, which we need.

5. Find the new ‘.thunderbird’ folder and open it. There should be at least two things in there: a ‘profiles.ini’ file and a folder with some bizarre number/letter name ending in a ‘.default’. 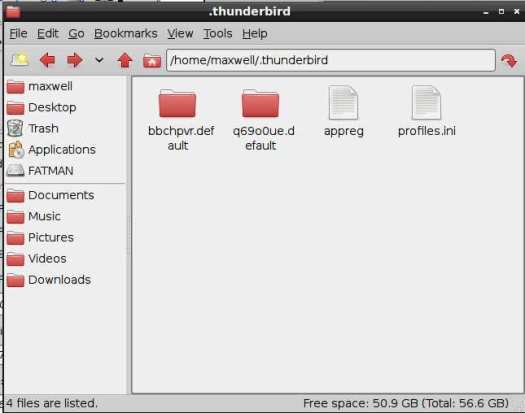 6. Open your old backed up file and find the ‘profiles.ini’ file and the bizarre number/letter ending in ‘.default’ folder and copy it into the newly made folder, making sure to overwrite the ‘profile.ini’ file with your backed up one.

8.  It will take a while but your stuff will start to trickle in. Between versions, Mozilla seems to change layouts so you might need to hunt around a bit for stuff but your old mail should all be there!